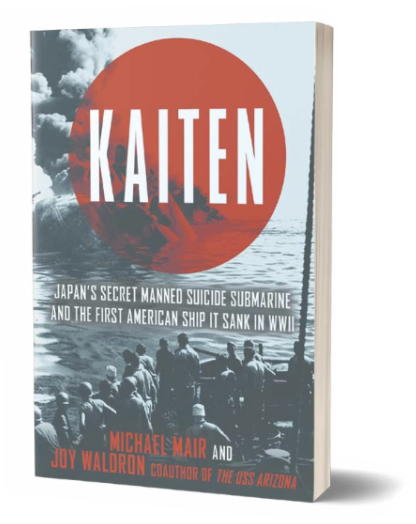 Back in 2005, John Mair, a WWII US Navy lay dying. He asked his son, Mike, to promise that he would write the story of the USS Mississinewa (AO-59). The elder Mair had been aboard the ship in 1944, when it exploded and sank in the Pacific.

Even though he carried the sadness and grief for more than 60 years, he wanted to ensure that the world knew about the strange and secret weapon that Japan had employed to sneak into the Ulithi Atoll and send the Mississinewa to the bottom. This book is a fulfillment of that promise.

As Mair’s son, Mike, began to dig into the story, he found himself poring over thousands of pages of documents, books, and magazines. As he researched, the story of the Japanese suicide submarines (Kaiten) and the culture that produced them began to emerge. He realized the ideals and goals of both sides were often the same, though the means by which they achieved them were very far apart. To tell his father’s story, he had to understand the cultural background of the submarine pilots. What motivated them to slip into small, sleek submersible vessels packed with explosives bound for a one-way trip to their destiny?

As his sources multiplied, Mair paired with Joy Waldron who brought three decades of journalistic experience with a specialty in underwater archaeology to the project. Together, they have crafted a riveting account that more than fulfilled the elder veteran’s final request.

Kaiten is the story of the November 20, 1944, attack on the USS Mississinewa. In addition, however, it tells the story of how the ancient Japanese warrior code of Bushido was integral to the Empire’s WWII strategy. From it, the dreaded kamikaze attacks from the air, banzai attacks on land, and Kaiten attacks below the surface of the oceans all emerged.

While just a small note in the history of the War in the Pacific, Mair and Waldron tell this fascinating story in a way that will hold you in your chair. As you turn the pages of this riveting, novel-like history, the old Sailor’s request will hang in the back of your mind. Without realizing it, you will be judging his son’s effort to fulfill the deathbed promise. And as you turn the last page, you will realize, Mair and Waldron kept the promise by telling the story of the sailors who suffered and died aboard the Mississinewa.  - - JAG ✪.

To purchase a copy of Kaiten, please visit our Merchandise page.