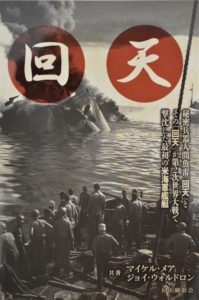 Published in the Japanese language by the Kaiten Kensho-kai organization

(The translation of Kaiten into the Japanese language was due to the efforts of translator Tomoko Nishisaki and Masami Ono. I began working with Tomoko in late 1997. Her interest in the secret weapon named “Kaiten” came after meeting an American businessman whose father died aboard the destroyer escort USS Underhill in July 1945. The book Kaiten would not have been written without Tomoko’s tireless efforts to connect me to the members of Kaiten-Kai. Masami Ono is the nephew of Jun Katsuyama who died when his Kaiten was rammed by the Underhill in Leyte Gulf. Masami Ono, like Tomoko, worked with me for years and was instrumental in connecting me with the Kaiten Memorial Museum in Shunan City. Sadly, Masami died in early 2017 from cancer. Tomoko and Masami urged Mr. Harada, President of the memorial group Kaiten Kensho-kai, to publish the book Kaiten in Japanese. Mr. Harada, age 79, had a personal connection to the Kikusui mission to Ulithi that sank the USS Mississinewa. His father-in-law was Captain Kamimoto, commanding officer of I-37 that was sunk near Kossol Passage (near Palau) on November 19, 1944. I-37’s mission was to launch four Kaiten attacking American ships as a diversion to draw attention away from the primary target of Adm. Halsey’s Third Fleet at Ulithi Atoll. I-37 was sunk by the destroyer escort USS Conklin one day before the attack at Ulithi. Retired members of the Japanese Naval Defense Force who are members of the group, Suiko-kai, translated Kaiten into simple Japanese so the story could be read by school-age children. Mr. Harada was impressed that the English publication of Kaiten was a fair and balanced story truthfully told from both sides. This fact helped inspire him to organize the translation and printing of the Japanese version. Mr. Harada gave copies of the new book to nearly 100 bereaved families who attended the annual memorial service at the Kaiten Memorial Museum on November 12, 2017. Copies are available at various locations in Japan. – Mike Mair)

*Please Note: Japanese language books purchased here will only be shipped in the Continental US by USPS)
$50.00 per book (shipping price included) 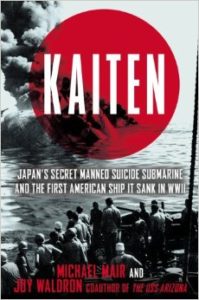 Read the full description below
Get a personalized autographed copy of “Kaiten” directly from Mike Mair!
These books are new, autographed, and shipped via USPS Media Mail within the Continental United States.

Click here to read a recent review of Kaiten from Military Trader magazine.

*Please designate the sentiment you would like to be included at time of ordering, otherwise, all books will just have Mike Mair’s autograph.

One-Size-Fits-All cap of wool/acrylic blend with “U.S.S. MISSISSINEWA AO-59” and “May 18, 1944 – Nov. 20, 1944” in yellow embroidery along with ship’s silhouette in grey embroidery. Great keepsake of this proud ship and crew.
Only $25 per hat (including economy shipping via USPS).

Check out with PayPal or Mail check made out to, Mike Mair, at:

In November 1944, the U.S. Navy fleet lay at anchor in Ulithi Harbor, deep in the Pacific Ocean, when the oiler USS Mississinewa erupted in a ball of flames. Japan’s secret weapon, the Kaiten—a manned suicide submarine—had succeeded in its first mission.

The Kaiten was so secret that even Japanese naval commanders didn’t know of its existence. And the Americans kept it secret as well. Embarrassed by the shocking surprise attack, the U.S. Navy refused to salvage or inspect the sunken Mighty Miss. Only decades later would the survivors understand what really happened at Ulithi, when a diving team located the wreck in 2001.

In Kaiten, Michael Mair and Joy Waldron tell the full story from both sides, from the strategic importance of the USS Mississinewa to newly revealed secrets of the Kaiten development and training schools. U.S. Navy survivors recount their gripping experiences in the wake of the attack, as well as the harrowing recovery efforts that came later. Japanese pilots reveal their terrifying experiences training to die for their country and Emperor, never knowing when their moment of doom would come.