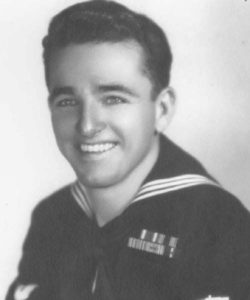 BM2c James C. Zahourek - of the USS Munsee - WWII
Visit the Veteran's History Project to see more details, along with a filmed interview of James C. Zahourek from 2005.
Kevin Keyes passed the word to us that, regrettably, his grandfather, BM2c James C. Zahourek, passed away today, 5 JAN 2020, at the age of 95. James was a USS Munsee crewman who boarded the Mississinewa during rescue operations back on 20 Nov 1944. He leaves behind Letha Zahourek, his wife of 75 years, and is survived by his children, Gay and Jeff, and his grandchildren, Jamie and Kevin. James Zahourek, along with the crew of the Munsee and other fleet tugs, took heroic actions that day in trying to save the Mississinewa during a grueling fire. Some of the men of the Munsee were actually fighting the fire onboard Mississinewa until the water was up to their thighs and only quit their attempts when the ship started to shift to port. Like all those who risked so much back in WWII, James will be missed.