Our thanks go to Kevin Kirk who sent photos of his deceased uncle and Miss sailor, S2c James Lovell Kirk. S2c Kirk enlisted at 17 years of age and had only turned 18 on 19June44, just 5 months before the Miss was sunk. Kirk died from burns received in the sinking of the Mississinewa. Immediately after his death at Ulithi, S2c Kirk was buried on Asor Island at Ulithi, then later moved to the cemetery at Pearl Harbor, and lastly reinterred at Sunset Memorial Park in South Charleston, WV. May he always be remembered and rest in peace.

It was young James Kirk who, though severely burned and dying, requested permission from the Lackawanna's OOD to come aboard after he was lifted from the rescue boat.

Kevin Kirk was also able to identify his uncle in the crew photo. For his efforts in remembering his uncle, we are grateful. 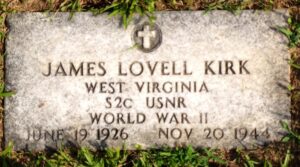